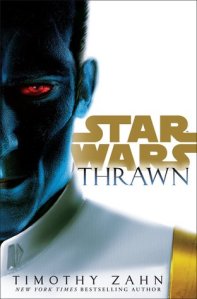 The timeline for those not in the know.

There were Star Wars book published before Heir to the Empire but they were never allowed to continue the story that at the time ended with the rebels blowing up the second Death Star. So events between the movies and a few adventure stories with Han and Lando were out there, but fans finally had a new story to follow with Zahn’s release. And most fans agreed that Zahn did it just right. The introduction of Grand Admiral Thrawn gave fans a new kind of villain; smart and cunning rather than powerful and Death Star obsessed.

I firmly believe that the Star Wars Expanded Universe would have been successful no matter what but with the original Thrawn Trilogy it was never in doubt. Fans like me ate up his moves, hated ourselves for rooting for a man trying to tear down everything the rebels had built, and always hoped for more once the story ended after three books.

Then, a few years back, it was all taken from us forever. The Expanded Universe was moved to ‘Legend’ and we would never get another Thrawn story, never get the back story we had all hoped for for so long.

Or so we thought.

Because not long ago I read that my favorite E.U. villain had been brought back into canon on the T.V. show Star Wars Rebels. This was cool but as it was a show I never have watched it left little impression. After all I promised myself I would not get involved in the new Star Wars outside of major releases; too much time reading horrible books just to keep up with the story well enough to read the stories that were actually worth it. But then the other shoe dropped. And here we are. With me reading a book about Thrawn’s backstory, by the man who first introduced him to us.

I just had to.

As expected this book deals with how Thrawn came to and worked his way up the Empire’s ranks. In the old EU it was hinted that Thrawn joined the empire specifically so he could prepare the galaxy for an even larger threat (the Vong invasion that consisted of over twenty books comes to mind) and a similar hint is given here. There is no doubt that Thrawn wanted to join the bad guys for a greater good though how that fits into the new canon is still vague.

Old canon or new it is the same old Thrawn at work here. He outsmarts everyone, seems to be losing only to turn it to a win, uses a cultures art to figure out everything he needs to know, and only fails after spectacular failures from those he trusts. It is still entertaining, I have always enjoyed chess masters as lead characters.

But it isn’t quite what it could have been if it had showed up before the canon reset. Tagged on to Thrawn’s fairly entertaining story is one of another character from the new TV show, the soon to be Governor Pryce. Thus is always the downside of tie-ins, often you must fight through a story of little interest to get to the one you really want. Pryce’s early story was filler, backstory to a completely different backstory and never needed until the end. Time spent with her took away time from Thrawn.

Perhaps that isn’t the worst thing that could have happened though. Because even the time I got with Thrawn in this book started to ring a little hollow. There has always been a bit of unnatural ability to Thrawn’s genius; he always has had knowledge the reader isn’t privy too and the way he reads cultural art for clues may as well be magic. But in this book it starts to be a hindrance to the story.

I believe it is the way Thrawn keeps pertinent information even from his subordinates that makes it stand out but the man’s genius just doesn’t feel fair this time around; it is told to us rather than shown on page. And this could just be time speaking but the ability to judge an entire species and their motivations just doesn’t feel right; note the ability has never been used on humans which should be just as alien to the man as any other species.

Thrawn is probably the book I have been waiting for but I am not sure it is the book I needed. There was enough entertainment here for die hard fans but I couldn’t imagine it working for a brand new reader of Star Wars fiction. And while it adds to backstory I don’t really think we learned a thing about Thrawn we didn’t already know.

Perhaps my tastes have changed and Thrawn was always too good to be true. But I am going to trust my memory here. This was probably a character that would have would have benefited in memory had it been left alone.