So I have an honest question. How much does a first person narrative absolve semi-pragmatic aspects of an 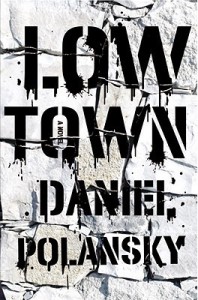 otherwise good to very good story? If a third person account says someone speaking a foreign language is jabbering it is quite often called out; but if a criminal overlord with some mild racist tendencies brings it up it is not necessarily the lore of the land but rather one man’s train of thought. I really don’t have an answer to this question at all, and it didn’t affect my personal enjoyment, but it was certainly something I noticed and thought about.

But I am doing this wrong. Reviews shouldn’t start with a negative should they? Ok, back it up, start with what I liked.

1. I like the first person noir feel Low Town had. The story starts with the protagonist finding the murdered victim of a well publicized missing child case and against his own best interest getting involved in the investigation. The narrative voice was STRONG. ‘The Warden’ has an obvious feel for the streets and quite realistically moves between the underworld he currently owns a piece of and the law he used to be part of. Take the best parts of Sam Vimes (feeling the street trough the souls of his feet) and Tracer Bullet (giving just a bit of levity to the proceedings).

2. I like the city that the book entirely takes place in. Getting an actually grasp on it is tough; it feels like Dicken’s London but in a timeline without any advances in gunpowder. Mostly we see it through the underbelly; drug lords and minor traffickers. But making the protagonist a drug lord opens up the whole city; there is nothing out of place with his travels taking him anywhere from the slums to the house of nobles. When we do see the lawful side of things we see exactly the corrupt force one would expect; complete with a real monster at the top that deserves his own book.

3. And finally I can’t fault the pacing or story at all; it kept me hooked throughout. Some of the twists are telegraphed a bit too hard but that is forgivable. Flashbacks are short but interesting and while they don’t answer everything they help fill in the protagonist’s rise and fall in society. It is a dark story for sure; the Warden is not against using violence to keep his territory and a reader can never forget he is only temperately back on the investigative trail.

Ok, I have had time to think about it and I do admit I am still kinda annoyed by the way race was portrayed at times. There was a culture that was very much a Chinese stereotype and while the protagonist himself doesn’t know how much they are playing to the part it is a deliberate choice. Women also didn’t a strong showing in Low Town; those with any ambition especially . This is a book that wouldn’t have seemed out of place on the shelves ten years ago and yet it is not weird to see a semi-recent release fail the Betchel test completely.

Reservations aside I enjoyed this book quite a lot and will be rating it higher than some of my criticisms suggest. I am already cussing that my library doesn’t have the sequel in audio format; I will have to track down that book in another form it appears. Low Town was a good blend of fantasy and Noir it is an author I will certainly be reading again.