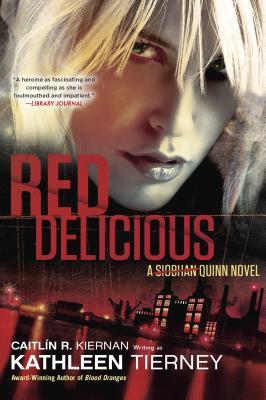 True story.  My dad asked me what I was reading and I tried to describe this book.  I said it was less of a parody and more of a parody of parodies; an entirely self aware narration that attempts to strip down everything about Urban Fantasy and built it back up so it looked exactly the same while being completely different.  He looked at me and let me know that he has a Masters and still doesn’t know what the hell I am talking about.

Why did I come up with a stuttering, quasi-intellectual line of bull shit when discussing what this book was about?

Siobhan Quinn is still the most unreliable narrator in the history of fiction.  She tells you she is lying, then lies to you, then lets you know that that could have been a lie as well.  We met her in Blood Oranges where she had something of a Flashman vibe; seemingly the hero of the story yet vile in most ways and living on luck almost entirely.  Or, not exactly living, being part vampire, but the point remains.  I loved the unique style, the plot was serviceable, and the humor was absolutely top notch.

But this is definitely a series best taken in small doses.  Little things that bugged in the first book itch even more while reading Red Delicious.  Some of this is no doubt by design, I know going in that Quinn is entirely too self-aware of the fact that she lives in an Urban Fantasy.  But she not only breaks the forth wall but tells us she is going to; and at some point this is less novel and more cartoon.  Perhaps she could jump off a building but not fall until she looks down in the next book?  Still, less of a complaint than an observation, it is more of the same from the first book after all.

Red Delicious has some strengths compared to the first outing though.  While I enjoy Flashman (and the Warhammer equivalent Ciaphas Cain) I was glad to see Quinn gain a lot more agency this time around.  She gained so much in her undead transformation it would have irked had she not figured out ways to make it work in her favor.  She plots against those who seek to use her, takes petty revenge when she knows she can, and defeats the other guys (bad guys is a stretch when taken in comparison to herself) using her head and abilities.  All in a much better plotted book than the first round.

So I look upon Red Delicious as something of a mixed bag.  What bugged me was what drew me to the first book; perhaps a larger delay between readings would have worked in my favor.  But I would assume that most who enjoyed this little monster’s story the first time around will find just as much to enjoy here, wrapped in a more coherent plot.