A nice little diversion here, I forgot how readable murder mysteries can be.  And that is 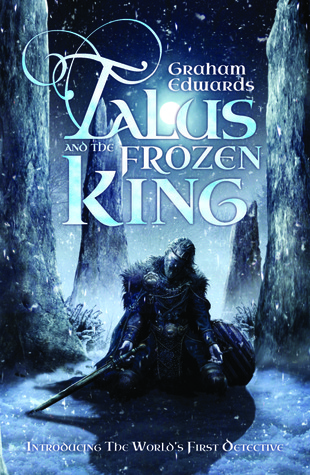 what Talus and the Frozen King is, a cozy little mystery set in the frozen north of an ice age.  Not a lot more, but nothing less.

Talus is a traveling teller of tales with an eye for detail and an obsession with not leaving the unknown alone.  He is joined on his journeys by Bran, the sidekick who is always a step behind the reasoning Talus is putting forth to piece together all the little puzzles in life.    Their travels have taken them north, into the frozen lands, each searching for something different within the same thing; spirits in the aurora borealis.  But along the way they end up in an isolated little village right as they discovered their king is dead.  And you better believe Talus is digging into this mystery.

Let me tell you what I can’t judge this book on; the mystery itself.  I have no idea how to judge such a thing, have not read a mystery since a small Tony Hillerman run back in late high school.  I saw where a few things were going, was a bit behind Talus a few other times, and was never real annoyed by info being hidden in ways that felt like cheating.  For me it worked, for a die hard mystery reader?  I couldn’t tell ya.

What I did enjoy about this book was a fairly unique setting.  The Frozen King of the title ruled over a village.  A census of his kingdom could probably be done from memory.  A much smaller setting than I am used to reading about, but it worked well for its purpose.   The ice age setting was very different from most anything I have read.  When Talus is eying the ‘riches’ of the king’s home he is looking at shelves with bones instead of the usual riches.  Fire is still precious enough that we get glimpse of many rituals behind it from different places seen through the eyes of Talus.

Likewise Talus was an engaging character, even if he was the most obvious Holmes homage in the world.  Not the literary Sherlock, though admittedly it has been ten years since I last picked up Doyle.  But rather he fits with what most of us think of the man; complete with Bran as Watson.  Eventually we even meet his Moriarty.  I wanted so bad to avoid the comparison, but the more I thought about it the less I was able to ignore it.  It does feel more like an homage than a rip off though, so don’t let it scare you.

What I didn’t enjoy so much was the way the book went Clan of the Cave Bear on us.  Never have felt it particularly clever to drop in small references that seem to pinpoint the invention of ideas.  Talus inventing maps during a murder investigation, when he is a world traveler, didn’t do it for me.  Nor did brothers coming up with checkers out of boredom. It is good enough that we have the world’s first detective, let’s not get overly clever.

A fun little mystery with a different setting, this made a great cleanser between longer books.

Feel free to spread the word: