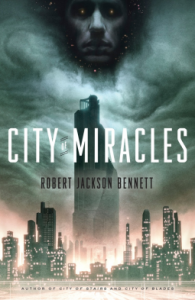 A boy chases laughter through the city. Followed by a presence he can’t see the boy keys in on laughter, any laughter, and throws himself desperately toward it looking for shelter or a way out. In a land once ruled by miracles the unnamed boy uses the only one he has at hand hoping for it to prove useful just one more time. And when finally hitting a laughter that rings a bit false…

And with this captivating scene City of Miracles begins.

One of the finest fantasy series of the decade is getting its conclusion. And with it some major questions will finally be answered, especially those surrounding Sigrud, a character who always stole the reader’s attention but never was able to get out of the other protagonists’ shadows. But City of Miracles doesn’t lazily ride off into the sunset, oh no. In City of Miracles the action is turned all the way up, all the feels are given at regular doses, and (spoiler alert) there are miracles abound. Yes, questions will be answered. And a whole wide world of questions will be left to wonder about.

This has been a series in which every book felt like it belonged in the same series yet all were very different in tone. City of Stairs had action but was more focused on the mystery and a real sense of wonder. City of Blades somehow ups the mystery and politics. And City of Miracles feels like a summer blockbuster until one looks back and realizes it couldn’t never work without the reader already being invested in the wonder and magic of the world.

This works for and against the narrative in some ways. It is a very different feel than the first two books and it is almost jarring to jump right into the action. Sigrud is a tougher character to follow and relate too than either Shara or Turyin Mulaghesh before him; his near invulnerability compared to their very human nature is not always endearing. And while those all important explanations eventually come I found that I preferred Sigrud when the more diminutive Shara was still the most dangerous person in the scene.

BUT, and this is a big but, those reservations I had eventually were for naught. And it would take major spoilers to explain why but Sigrud’s humanity does start to show, and eventually becomes the key to everything. City of Miracles isn’t necessarily a tear-jerker but the emotions do start to run high. And while the action never really slows it is always action with intelligence; each scene builds on the last and each piece of information Sigrud and his supporting cast learns will be needed to stop the new threat.

What a threat it is too. Villains have not really been present in this series before. The Gods were slaves to their nature; capable of much destruction but just as tied to the people expectations as they were to their own whims. But the new threat is certainly evil. World destroying evil. Yet even this creature, most evil seen in the series, has just enough humanity to make a reader hope for redemption

As a series conclusion City of Miracles was all I could hope for in a series I never wanted to see end. Though City of Stairs has remained my favorite of the trilogy each successive book has added much to the story. Sigrud dominates the page but here both Shara and Mulaghesh (plus some important newish characters) get their own successful conclusions. And I can’t help think I am due for an entire series reread sometime in the very near future.