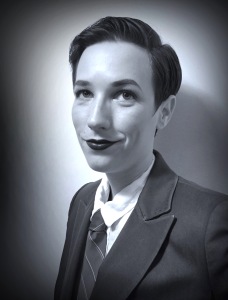 Earlier this week I raved about Amberlough, the amazing debut from Lara Elena Donnelly.  I was not even halfway through the book before I realized I absolutely had to ask the author for a chance to do a Q & A session.  Graciously she agreed!  No further ado needed; I present to you you good readers… Lara Elena Donnelly.

First of all. Thank you for agreeing to do a quick Q&A. I loved Amberlough and wasn’t even halfway through it before I was contacting your publicist to ask for this opportunity.

LD: Thanks so much for saying so! I’m really glad you enjoyed it.

This was both a political and character driven book. Which came first; Amberlough City or the characters who live in it?

LD: Aristide Makricosta came first, fully formed and standing alone in a desolate mountain pass. And then I had to figure out who he was and where he’d come from. So Amberlough city was born. I figured only a place that crooked and glamorous could produce someone like Ari, and that he’d only ever leave it for the mountains if it was well and truly doomed.

What type of historical research went into the writing of this one? Are you a history buff who went off an area of interest or did something spark your interest with furious research of something unknown to follow?

LD: I wasn’t a big fan of history until college. I had written a few fantasy stories set in Victorian London, and took Modern European History my freshman year with a professor named Christopher Oldstone-Moore (incidentally, an expert on beards), who really knew how to make history breathe for students like me: conceptual, narrative thinkers who had trouble with names, dates, and places.

I still didn’t read much nonfiction until Seth Dickinson’s marvelous novel The Traitor Baru Cormorant blew my mind. I wondered how on earth Seth knew everything about…well, everything, from currency manipulation to naval battles.

The morning after I finished his book, I went to the library and loaded up on any piece of nonfiction that looked faintly interesting. That fateful trip put D.J. Taylor’s Bright Young People in my hands, which led to a lot more research about Jazz Age London, which deeply influenced Amberlough as well as several other projects.

So I guess I was a modern European history dilettante before this, and then Britain in the 30s really piqued my interest, to the point of obsessive research.

That cover! It perfectly matches a stunning scene in the book. Does an author have any influence 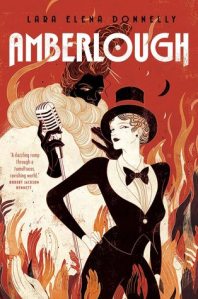 over its design? And how happy were you with it?

LD: I burst into a stream of gleeful cursing when I opened the email attachment. So many people have told me they want it as a poster. I want it as a poster! And though there’s that adage about books and covers, I imagine this one will leap off the shelves at folks.

As far as input—my editor, Diana Pho, asked if I had any ideas, and we both made Pinterest boards and shared them with each other. Mine had a lot of early 20th century advertising art. Hers was mostly black and white photography, reminiscent of Brassaï. We shared those inspirations with marketing, and I sent along a lot of my own character sketches for reference. Then it was up to marketing and the art departments.

One of the reasons I was so keen to work with Tor is that their Art Director, Irene Gallo, has faultless taste, and she definitely delivered. Victo Ngai, who has done a lot of gorgeous work for Tor/Forge and Tor.com, captured the book perfectly.

Your Twitter lets me know you are not afraid to get political so I hope I can ask this. There is always a fear of repeating history but did you think Amberlough would be such a relevant cautionary tale when you started writing it?

I had no idea. Well, no conscious idea. I finished it in the spring of 2014, well before the dreaded election cycle of 2016 even got under way. But I came of age in post-9/11 America, and I think that miasma of nationalism, fear, pressure, and prejudice has probably influenced a lot of artists my age directly and indirectly. It certainly influenced our political climate. I was writing yet another guest blog the other day, this one talking about the warning signs of fascism—so many of my guest blogs about Amberlough have been about the warning signs of fascism—and realized it only took the U.S. 13 months longer than 1930s Germany to elect a dangerous populist leader in reaction to a national trauma.

It seems that discussions about representation have dominated fantasy-based blogs and forums the last few years. So I will ask this flat out. When you finished writing this book how optimistic were you of the book being released and promoted purely on its merits vs being marketed as a niche title?

LD: I obviously hoped that people would buy and enjoy the book on its merits, among which I count the complex interactions of a cast of incredible diverse people. I’ve spoken a lot recently about confronting unconscious bias in my writing process, and the realization that a diverse cast ultimately makes for a more compelling narrative. Including characters with wide-ranging identities and experiences necessarily creates tension—a vital aspect of any story.

Prior to the election, I thought Amberlough’s diversity might be a selling point—not the only selling point, but hopefully one of several. Now, pretty much every aspect of the book has been eclipsed by its timeliness and political parallels, which I’ve found variously ironic, exciting, and unnerving.

In your opinion would Amberlough get a major publisher to pick it up ten years ago? Five years ago?

LD: Sure. If this is purely a question of queer content, Lynn Flewelling and Ellen Kushner were successfully publishing queer fantasy in the 80s and 90s. I even used Swordspoint as a comp title.

Is this it for the world of Amberlough or do we have a series? Or what are you working on next?

LD: I have high hopes about continuing this story, but can’t say anything definitive right now. Except that: if you read Amberlough and want to find out what happens after, buy a second copy. And a third.

Once again. Thank you so much. Both for this book and for your time. Best of luck to ALL of your future projects and I hope beyond hope Amberlough gets all the love it so richly deserves.

LD: You’re welcome! And thank you for having me!

Great answers all around.  For more information, again, you could check out my review!