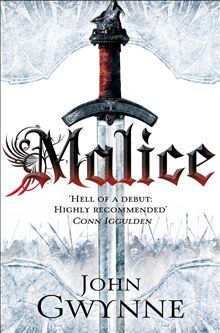 It is a story that epic fantasy fans will fall right into, as comfortable as a favorite shirt.  Signs are starting to show of an ancient prophecy coming to pass; stones bleeding, giants attacking, solar eclipse coming, etc.  A fight between the gods is coming.  There will be war.  There will be clashes between kings.  There will be a chosen one, or maybe chosen ones as each side picks their own (The Bright Star and the Black Sun of prophesy).  Comparisons to the big hitters of the genre are impossible to pass up; but hey, no one person owns the right to the title of ‘Kingslayer.”  And as long as Gwynne doesn’t kill off that big lovable pup I am cool with its inclusion.

A good book, and after a sluggish start one I ended up enjoying quite a bit.  And in some ways this is surprising because throughout the entire story I don’t think I was ever surprised, never felt fear for a character, never felt that a shock was coming around the corner.  In fact the most subversive part of the story, that of a chosen one’s rise in power taking on a darker path, was so transparent I saw where it was going long before it felt like I was supposed to.  Has subversion become the new norm?  Was the story really that transparent or is it only because I read so much from the genre that I noticed?  Did I just drop a major spoiler and not even realize it?

It doesn’t matter much to me because as I said, this was a good, comfortable book.  Multiple point of view characters, and surprise, all were fairly entertaining.  A nice mix in them as well.  Corban is obviously working his way into being a major player in the story, and his training (while perhaps a bit too easy for him) is a nice school like story that doesn’t feel like another world from the rest of the group’s story.  On the other hand the point of view of Veradis is one of a person watching a major power growing; the prince he guards has no point of view chapters of his own, and I felt it worked well to watch the story from his side rather than read his thoughts.

It was the prince that Veradis guards, Naithar, that really shines.  It was his story that I wanted to read more about.  Yet, it was his story I referenced earlier as holding no suprises, and I stand by my statements.  Early dropping of phrases like ‘the greater good’ told me exactly where his story line was going, and I never guessed wrong.  But I still was entertained by it, it was by and large very enjoyable.  Proof again that innovation alone does not a great story make; old ideas in the hands of a skilled writer can still be incredibly entertaining.

Throw in some entertaining battles, complete with giants and some snake like dragons (wyrms, whatever they are called).  Add a great character people call a witch, a fiery knife throwing young girl that deserved WAY more page time (but seems set up for a nice role in the future), and some interesting back history (this land has a deity that walked away from the world after the last battle) and I think the book is a winner on the whole.   As long as the reader isn’t expecting anything genre bending it probably won’t disappoint.

A few minor quibbles.  The first third seemed to be a different book, not just in the typical ‘set up a trilogy with tons of info’ way, but just choppier in general.  I also wouldn’t mind someone else rereading this and letting me know if it passed the Bechdel test, I didn’t really track it but I am leaning toward no.  As much as I liked the two major female characters I can’t really remember them interacting with anyone other than the men who acted as bigger players.  They were nice characters but needed more page time.

There it is, a more negative review than I intended to write for a story I enjoyed.  Perhaps I have had a run of debut epic fantasy sour me a bit, causing me to be a bit jaded and taking it out on poor Gwynne.  Because, and I want to reiterate this, I enjoyed Malice.  Recommend it even.  Just don’t want mis-sell it as something it isn’t.  This is a good, solid, comfort read.  Nothing less and nothing more.

Review copy provided by the publisher through NetGalley.

Small Spoiler.  ‘ Naithar’s story is what Anikan Skywalker’s story SHOULD have looked like in the prequels.  A rise toward the dark power of the land while thinking the entire time you are the good one.  Good stuff, just wish it had caught me off guard.  ‘