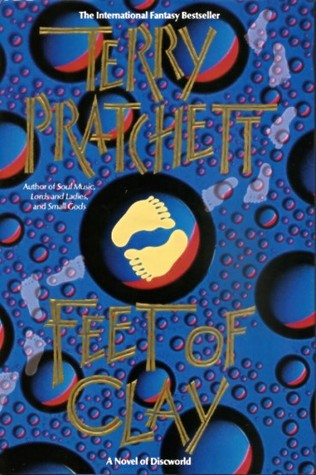 Part 19 of The Complete Discworld Re-read

“Many fine old manuscripts in that place, I believe.  Without price, I am told.”

It is completely possible that I have underrated Terry Pratchett.  After all I have only shouted out everywhere that he is my favorite author, bought every book he has written, recommended his work to the six people who have never read it, and almost immediately upon started a blog engaged in a complete re-read project that provides, oh about, ten percent of said blogs content.

But here I just finished Feet of Clay.  And at first glance I wanted to say, oh ya, more goodness from the man.  I was thinking that this was a very consistent run from the man, starting from Maskerade and moving right through The Fifth Elephant; a run that didn’t have a bad book in it yet held none of the true standouts of the series.  It is also a run that didn’t stray from the established characters, leaving a feeling that maybe Pratchett had hit a comfort zone and was going to run with it.  Nothing wrong with that at all, for a long time I would have considered the night watch books from this run to be my favorites.

But wow, this book is good.  Really good.  One of the best yet in fact, and I never realized it because it is hidden right in the middle of a strong run.  Tight plot, actual growth of already beloved characters, an awesome friggin golem.  I remember it being good, I remember it being funny, I REALLY remember a particular scene in which Vimes recites ‘Peter Piper’ in the most awesome way imaginable.

What I don’t remember, or maybe just didn’t realize, is this is one of the tightest plots in Discworld.  Many authors are content to have ‘side plots’ as an auxiliary to their main story; and often they have as much importance to the story as the dedication at the beginning of the book.  Even in good books this happens, usually keeping important side characters of the series busy when they don’t have their own spot in that particular book.  But in Feet of Clay there are no side plots- or they are all side plots- I have not really decided.  What is clear is there isn’t a ball in the air that isn’t important, not a loose thread in the entire book.  Each character does goes their own way and each of their paths meet up in the middle, and it is done so seamlessly that I assumed it was SIMPLE until I really looked.  Is it true that Pratchett doesn’t even outline his books before he starts writing?  Amazing.

So what are the threads woven so expertly?  An attempted assassination of the Patrician, a golem gone insane and the other golems of the city facing backlash, Nobby’s rapid rise up the class ladder, a couple of murders, a few people facing up to their own prejudices (most of whom are fighting against preconceived notions thrown their way) and even a dwarf fighting a cultural battle to take control of her own gender.  Whew, makes a man tired thinking about it.  And of course for any fans of the Patrician (which I certainly am), the old puppet master seems to have a hand in just about all of it.

Vimes is everything we love at this point.  A man who knows his limitations, fights his old urges, and seriously prods buttock when needed (it’s a shame that his wife gets zero page time in this outing, she usually brings out the best in him).  Carrot took an interesting turn, still the good ol’ boy farm kid with the sharpest mind around hiding behind a lummox of an exterior.  But some flaws show up in the man, he who loves all types can’t fathom a dwarf coworker showing a bit of her feminine side.  But hey, while Angua  stays busy showing him the error of thinking she is going to have to face her own biases eventually (and eventually share her secret with the person who is terrified of it).

Really it comes back to what I said up top, I have underrated Pratchett.  There is nothing about this book I want to nitpick, it suffers only from not being completely unique.  Men at Arms, Feet of Clay, Jingo, and The Fifth Elephant all seem so similar they blend together; and that completely hid from me how good this outing was.  Well no longer, I must say this book is currently sitting in my top five.  Let’s see how that holds up as I continue reading though the whole series.